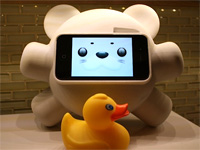 Not only does Synergeering produce quick and durable engine components, but industries a little on the softer side are also being well advanced with RapidNylon®.  ArborCube approached Synergeering Group with a new concept for an iPhone holder for children; the ibuku pet. The holder designed for young kids replicates a toy character making it easier for kids to interact with the movement of today’s technology. Before they could even think about mass production for the concept, ArborCube had Synergeering produce their first prototypes of the holder using RapidNylon®. STL files were sent and within days they had a functioning prototype in hand. Designers were able to quickly prove out their design, targeting the tight tolerances with the interference fittings to fully assemble with the phone. After several iterations, the design was sent for its next phase and final tooling was cut for mass production. The ibuku pet will be on store shelves soon!